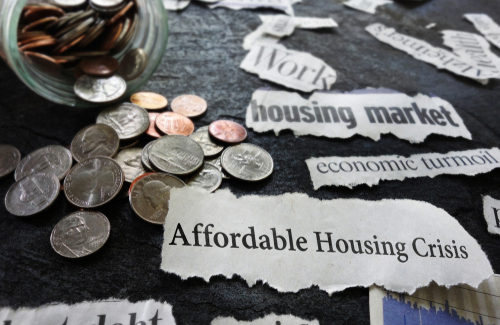 The housing market is faced with a huge affordability gap. Despite a strong economy, rising wages, a low unemployment rate, and falling mortgage rates, most Americans struggle to afford an entry-level home. Over 70% of US counties have an affordability crisis, and most people are spending way more than the oft-touted standard of one-third of their income on housing. This problem extends beyond housing: Americans are struggling to make ends meet when it comes to basic needs like utilities, food, and healthcare.

The affordable housing crisis has emerged as a consequence of multiple overlapping factors. Baby boomers living longer and downsizing, sluggish wage growth, rising costs in labor and materials, and local opposition. This sometimes takes the form of NIMBYism, which refers to the attitude of “not in my backyard” that leads to the passage of stringent zoning restrictions. The relationship between the affordability crisis and policy extends beyond NIMBYism—historically, affordable housing legislation does not serve to help renters make the jump to homeownership.

What is the makeup of the affordability crisis?

The problem is not the same across the board: highly coveted first-tier cities like Miami and New York have a more pronounced affordability crisis than others. The Bay Area has become particularly infamous for having the least affordable housing, and other areas of California, such as San Diego and Los Angeles, are not markedly different. The problem isn’t as pronounced in second-tier cities like Cleveland, Detroit, and Philadelphia, where there are more affordable homes.

There are also notable discrepancies in the affordability crisis based on generation. According to a recent survey conducted by the National Association of Homebuyers, millenials—most of whom are buying their first home—are much more likely to purchase in the next year compared to other demographics.

What does this mean for the real estate industry?

Savvy developers and agents are viewing the affordability crisis as an opportunity. The affordability gap has reinvigorated demand in the rental market—especially in expensive locations like the Bay Area. In general, most homes are not built with renters in mind, but developers are taking note of the trends and adjusting accordingly. It’s quite likely that in years to come, we’ll see neighborhoods that are almost entirely made up of rental homes. Most renters can’t afford to buy homes, and many aren’t even saving for a down payment at all.

This will lead to a new sense of possibility for some buyers. It could be the case that many people are giving up on the idea of homeownership, at least for the foreseeable future, will shift the scales towards a buyer’s market. The affordability crisis has been slightly mitigated in recent months by a drop in mortgage rates.

One other factor that is currently creating the affordability crisis is the tightening of lending standards that has taken place since the Great Recession. In reality, homes are more affordable today than they were in 2007. However, that was during a time in which subprime lending was leading many people to purchase homes that they could not afford. This is no longer the case, which is good for the safety of the economy, but by being possibly too stringent with lending, we may have made it a little bit too difficult for Americans to own homes.